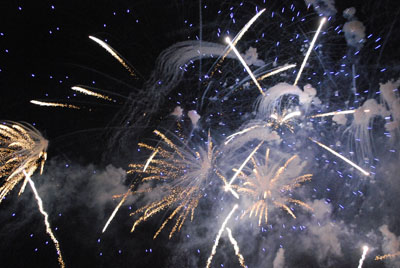 Each June 16 and 17, Pisa transforms itself into a fairytale kingdom as it celebrates the feast day of Saint Ranieri, Pisa’s patron saint with the Luminara di S. Ranieri, an event that dates back to 1688 and the Palio di San Ranieri which has its origins hundreds of years earlier. On June 16, the eve of the saint’s feast day, the Pisa paints itself with over 70,000 “lumini” [small glass votive lamps burning oil or wax] on the windows, balconies palaces, the parapets along the river Arno and the bridges while many other candles are set free to float on the River Arno. The evening concludes with a massive fireworks display.

The following day four boats representing the four Pisa districts compete in a rowing competition down the River Arno. The winning team isn’t selected until a rower climbs the 25 foot flag pole at the end of the course and captures the flag.